White privilege exists, as do other kinds of privilege such as financial privilege. I would like to stipulate to the former if not the latter. However, 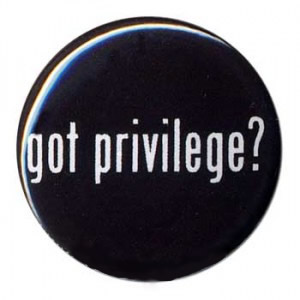 there are a whole lot of what I call “privilege hunters” out there, hyper-vigilant around issues of privilege and waiting for the opportunity to point out – perhaps scream out is a better description – whomever they believe has privilege they do not. Frankly, that becomes counter-productive, a kind of masturbatory ritual of anger that only serves to further isolate the privilege hunter as they identify more and more people with whom they cannot possibly enter into relationship unless and until they surrender their privilege. While someone with financial privilege could give their money to the poor and thereby surrender their privilege, it’s awful hard to surrender my Caucasian-ness, to coin a term. Oh, I am very aware that I can surrender my privilege in a small way by naming it whenever I am given preferential treatment, but there is still this awkwardness around my skin tone. At some point, if entering into relationship with you requires a Herculean amount of effort and self-abnegation, I will simply decide doing so it far too expensive an undertaking and move on. I don’t mean that to sound like a threat, it’s simply reality. This is why the really pretty girls have trouble getting a date.

It has been pointed out that we all enjoy privilege in some setting or settings. That doesn’t negate the fact that in other settings we do not have privilege. However, staying on the level of naming doesn’t really move us forward, and one note Annies don’t write many hit songs – with due apologies to Sonny and Cher’s The Beat Goes On. The angry finger of righteous indignation can be fun to point, especially when it gives an oppressed group a rare chance to cry out with feelings of superiority. Perhaps more importantly in the long run (pun intended), spending most of our time engaged in masturbatory ritual is a rather limited existence not likely to bring much lasting happiness to anyone, despite its short-term satisfactions. Of course, some will respond to this post by saying I am only trying to silence them as they point out my privilege. That’s simply not true. I invite you to incessantly bang whatever drum you choose. I do believe the consequence of that choice is eventually getting tuned out, and I will be one of the people doing so if all you have to offer is the accusatory finger. Have you noticed that The Beat Goes On doesn’t get covered very much?