The Huffington Post reported that senile televangelist Pat Robertson advised a young girl to pray over clothing she purchased at Goodwill. According to Robertson, not every article of used clothing has demons attached to it, but “it ain’t going to hurt anything to rebuke any spirits that happened to have attached themselves to those clothes.” He had no comment about his own inability to get the stupid out of his own clothes, perhaps because they weren’t purchased at Goodwill.  I suppose that one of the advantages of being absolutely crazy from a young age is that when you start to become demented it’s hard for anyone to detect a difference!

If I have to tell you that the world is not full of unseen demons, you probably aren’t a regular reader of my blog. Let’s examine the question a bit more just for giggles. Robertson advised praying over the clothing to rebuke the demons, but I have some more in depth questions. Do you have to wash it afterwards to remove any demonic residual, and if so what kind of detergent is 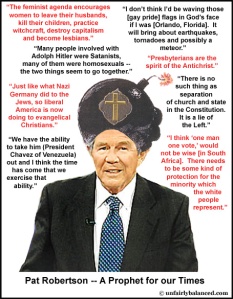 recommended? Surely generic detergent won’t do, but are there any name brand anti-demon recommendations? What temperature should we wash the clothes in? Demons like it hot, but hot is better at getting things out. What about fabric softener? Is it a good idea, or is there a chance that fabric softener will make the clothes so nice and comfy the demons may want to return? Are demons more likely to attach themselves to revealing clothing than dowdy polka dot dresses? Since demons are supposed to be pretty devious, even demonic (hence the name), why don’t they vacate old, musty clothes shoved in a big plastic trash bag and destined for Goodwill? Can’t they find their way out?

The really tragic thing about all of this nonsense is that people believe this senseless drivel and continue to send Pat Robertson money because they believe he is a prophet. They believe he is a prophet because they have no idea what a genuine biblical prophet is and is not. A prophet isn’t a fortune-teller and doesn’t predict the future in specific ways. An authentic prophet recognizes injustice in the status quo and criticizes it, calling those in power to change their ways or face the essentially karmic consequences of their acts of abuse and injustice. They call on the rich to stop persecuting the poor, the majority to stop persecuting the minority – and real prophets most often pay the price of upsetting those in power. Authentic prophets, because of the consequences of their criticism of those in power, are most definitely not wealthy, nor do they command media empires – a fact apparently lost on contemporary Evangelicals and Pentecostal con artist clergy. If Pat Robertson has ever been near a Goodwill, it was so many decades ago that he had to travel there on horseback.

The entire cult of the demonic is a function of the False Self, the ego run amok. Our ego needs to believe that we are in change just in case God should happen to screw up. Our ego wants control, insight, and ultimate power. By definition ego lacks the humility to have faith or trust and so we turn to fools like Pat Robertson and his ilk whom we believe will give us special insight and knowledge that will allow us, rather than God, to control the future because in our arrogance we recognize we are far more qualified. In the end, our wallets are empty and we are reduced to the absurd belief that we are casting demons out of second-hand clothing. It’s the kind of reasoning that earns one a nice white jacket with very long sleeves and a very comfortable room with padded walls.