Many of us have it all wrong. You can be a person of faith and a patriot. You cannot be a person of faith and a nationalist, because sooner or later a conflict between those two value systems and you will have to make a choice. For many people, though they may not realize it, that moment has come and they have abandoned what they claimed to believe but never gave much though to – their faith. They will still show up in church this week, but they are there in body only because they have to intention of following the teachings of their tradition. Let’s being with some definitions:

Nationalism: loyalty and devotion to a nation; especially: a sense of national consciousness exalting one nation above all others and placing primary emphasis on promotion of its culture and interests as opposed to those of other nations or supranational groups.

Patriotism: love for or devotion to one’s country.

Faith: strong belief in God or in the doctrines of a religion, based on spiritual apprehension rather than proof.

Stated another way, nationalism holds that my country is always right, no matter what it does. Nationalism brooks no dissent. Patriotism says that I love my country and want to make it stronger. Faith says that ultimately my understanding of the will of the Divine is the basis for my decisions. 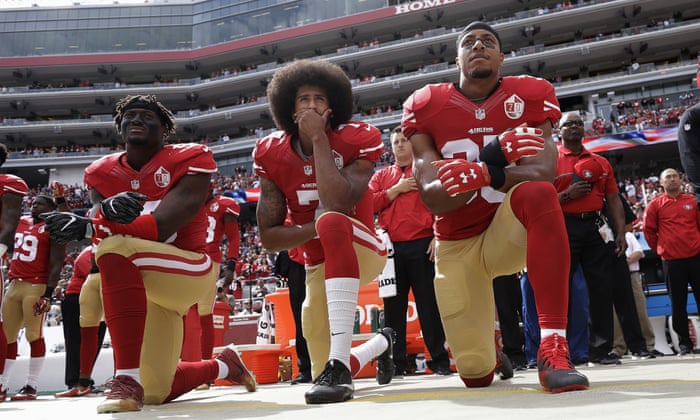 The men on the left are patriots. They are not nationalists. They believe something is wrong in America (I would agree), and are protesting by taking a knee during the national anthem. Their right to do so is protected under the First and Fourth Amendments to the Constitution. They are, in effect, saying that there is something wrong in America and they want to do what they can to see it changed.

The man on the right is disrespecting the flag by wearing it as clothing, not to mention by sweating and bleeding on it. Odd that he is a

self-identified nationalist, don’t you think? Yet none of his fellow nationalist called him to account for his flag desecration. Maybe they were too busy waving the flag of another country (the Confederacy), which advocated the overthrow of the government of the United States and therefore is a symbol of Treason. This points out that, at its core, nationalism is about power and control and only uses country as an gossamer thin excuse for violent action. 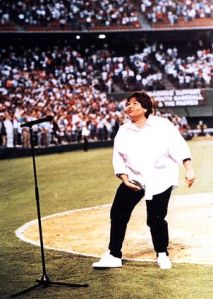 Here’s an odd thing. The woman on the left is blatantly disrespecting the National Anthem by making an obscene gesture after screaming the National Anthem at a San Diego Padres’ baseball game. People were offended, they did call for her to never work again, and her claims that she was only making fun of baseball players adjusting their protective cup and spitting were largely not believed. In many ways, the reaction to her alleged attempt at humor was the same as to Colin Kaepernick – who made no obscene gesture, has not spit on the ground, and did ‘s not absolutely mangle the singing of the national anthem. Why might that be?

Here’s another odd thing. The men at right were silently protesting during the national 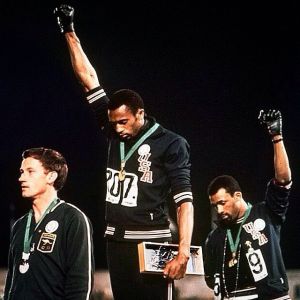 anthem after winning medals at the 1968 Olympics. Here’s the Huffington Post’s take on it: “U.S. Olympians Tommie Smith and John Carlos — who’d won gold and bronze respectively in the 200-meter sprint — raising black-gloved fists during the medal ceremony at the 1968 Olympic Games in Mexico City became one of the most iconic sports images of the 20th century.

The protest had been something the two athletes carefully planned. As Smith and Carlos walked to the podium, they took off their shoes to protest poverty. They wore beads and a scarf to protest lynchings. And when the national anthem was played, they lowered their heads in defiance and raised their fists in a Black Power salute that rocked the world.”

They were suspended from the US Track team and played three years and one year in the NFL.

Now, one last picture, this time on the left. This man is kneeling, too. I post it because I want to show that Jesus knelt. Jesus was unopposed to kneeling as a practice. He never endorsed a government and was very critical of the occupying Roman forces. He gravitated toward those whom his culture rejected and his general message was one of the upeaval and reversal of cultural and economic values, including the inclusion of the oppressed. They killed him for it. There is nothing in the record to indicate he would have been anywhere but kneeling with Kaepernick, et. al. You quite simply cannot be a nationalist and a Christian, because the former is a violation of the First Commandment.

Oh, I almost forgot. Lest you nationalists seek to continue to make this something about respect for the Anthem, have you noticed the difference between the first, fourth, and fifth pictures – those who were severely persecuted for their stances – and the second and third? It would seem that whitey can get away with a whole lot that people of color cannot. Tell me again how this has anything to do with the national anthem.