As the old saying goes, when the whole world is crazy and you are the only sane one, it might be time to reevaluate things. If you have ever met someone who never believes they are wrong, who never accepts any responsibility for anything that goes wrong, who 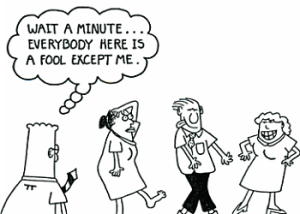 tries to turn everything back onto someone else and come out smelling like a rose in the end then you may well have experienced one of the most frustrating situations in human existence. The most frustrating part is that such people honestly believe their own spin, often because they are psychologically incapable of accepting responsibility for anything that might damage their image in the eyes of themselves, primarily, and others secondarily. For these people, to be less that perfect is a kind of death. The result is that they run about doing and saying things that, though they don’t realize it, make them look pretty crazy to the people around them. Their self-image is so important that if only they could step outside themselves and take an honest look they would be compelled to change their behavior – but of course they cannot, precisely because they couldn’t tolerate that kind of psychological insult.

What to do in situations like this? Sadly, about the only thing you can do is get some distance from the person and hope that eventually their behavior leads them to get help. Not unlike addicts, it is likely they will have to hit bottom, and hit it hard, before they can do that. You don’t want to be hit by flying debris when that happens.