At its worst, religion becomes a rather transparent attempt to control God and other human beings. We see this in things like prayer 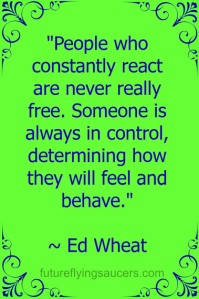 formulas that encourage people to “name it and claim it,” in the so-called prosperity gospel, or so-called confessing movements that attempt to define precisely what a believe may and may not believe to retain membership in a community, or in the process of excommunication which says if you don’t toe the line we are going to kick you out – for your own good, of course. At it’s best, religion is filled with spirituality, which Marcus Borg has defined as the attempt to make sense of our world. Sadly, over the course of my lifetime, most religion has become obsessed with control and lost touch altogether with spirituality, to the point where the very word has become suspect. No wonder people are leaving every day.

If you discover that someone is trying to make decisions for you, in any context, it’s a good indication you are in an abusive situation. Get out. There is nothing good for you about being treated like a child who is unable to make good decisions for themselves. Healthy systems of all kinds encourage the development of independence and allow people to leave freely when the time has come when leaving is appropriate. We are all responsible for our own health and safety!