I’m so proud of Rush Limbaugh. He’s finally come out as the gay man we always knew he was. What courage he has! In case 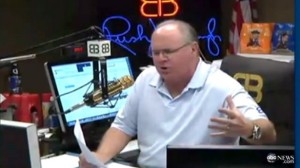 you missed it, it inadvertently slipped out in his commentary on the Hobby Lobby birth control decision last week. He argued on his show that the federal government was treating pregnancy like an “imposition that women need to be protected from.” He then continued, “And yet, they wouldn’t have the problem if they didn’t do a certain thing,” Limbaugh quipped. A certain thing – like, well, have sex with men. Since Rush obviously isn’t interested in ensuring that women can have responsible sex with men – and ignoring entirely any responsibility their male partners have to ensure that birth control is used, along with the millions of women who use birth control for medical reasons other than contraception – it’s pretty clear that Rush isn’t interested in having sex with women. Therefore, he has come out as a gay man. It must be such a relief to him to finally get the truth of who he is out into the open. And, since assholes are pretty important in gay sexual encounters, I am guessing he is going to be pretty busy!