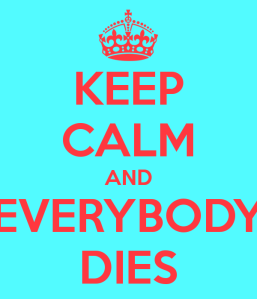 death in the first three decades of their lives. Some of them have had to deal with an above average number of life changing medical challenges such as stroke in people close to them as well. While I wouldn’t wish those struggles on anyone, the truth is that the people who endure them tend to be more mature than their contemporaries. We can debate whether that is a good thing or not. I’m inclined to think it’s good as long as it doesn’t cause someone to miss out on having a childhood.

The other challenge is that when we are confronted with our own mortality at a young age we may become fearful of taking the risks necessary to establish ourselves in life. There may be a great job opportunity at a slightly risky company that the average twenty something would jump at that those with an acute sense of their own mortality might avoid because they are afraid if things go south they won’t have time to recover. The somewhat oxymoronic truth is that Americans as a whole need to be much more aware of their own mortality but also need to be sure they don’t let that awareness stop them from living. It’s a spiritual task of primary importance, and one that institutional Christianity hasn’t really even tried to address – yet another reason people are running to eastern religions, which do a much better job with the realities of life!