Apparently HGTV just called off a show that was to star the twin brothers pictured at right, David and Jason Benham. Supposedly they 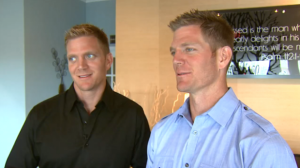 hate everybody – gays, Muslims, divorce, and public schools for starters. First, a disclaimer: you can’t tell if someone is gay from a picture. Second a report from my amazingly accurate “gaydar” for a straight guy: those two twinks, er, twins, may be the biggest case of repressed and self-loathing homosexuals I have ever seen. There wouldn’t be anything wrong with that, except that being self-loathing is actually rather unhealthy and they are seeking to repress and persecute their fellow homosexuals even more than they are. That’s rather like Al Sharpton leading a KKK rally. Now, don’t misunderstand me, everybody is entitled to their dumb assed beliefs. What they aren’t entitled to is the opportunity to express them on the public airwaves, or cable waves for that matter. If you want to run other people down, get a bull horn and a street corner – but be sure you check with your secret boyfriends first!