Seems they is some fellers down in Texas wants to secede from the Union because President Obama won re-election. Here’s a lovely picture of them communicating their heart-felt sentiments: 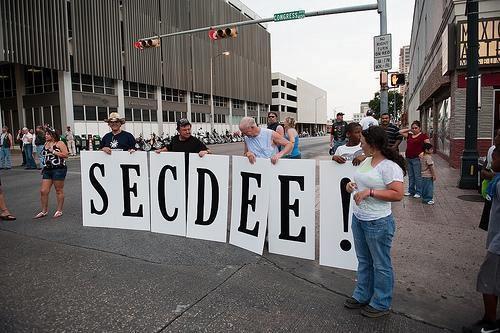 I wonder, should a group of people be allowed to do anything that they can’t spell? Most people can, after all, spell the basic bodily functions like eat, sleep, pee, poop, burp, fart, and a few others. They would be fine. However, it seems too me that these secdee people have overlooked a few things in addition to paying attention during spelling class.

We can only assume that these hillbillies are upset because Romney didn’t win, which means they thought their taxes were going to be decreased if he did win (which means that, once again, they weren’t paying attention). I guess they don’t realize that once they secdee all federal assistance will stop. Not only that, but the secdeed nation of Texas is going to need a military. They’ll need an army and an air force and, because they have ocean exposure, they’ll need a navy too. That military is going to need equipment – like planes, battleships, helicopters, tanks, Humvees, rifles, anti-aircraft weapons, and a host of others. I wonder where they will get the money. You don’t suppose they will have to raise taxes to pay for that, do you?

Oh, yes, and they are going to need currency, and border guards, and their own version of the Pentagon, a Congress, a cabinet and a President. Maybe Rick Perry would want to be President, if he is able to remember those three things he wants to do. As soon as possible, I believe the United States should build a large fence around the secdeed nation of Texas in order to keep them on their side of the border. We don’t need any illegal Texans sliding through the border. And, bad news for the Dallas Cowboys, who won’t be able to play in the NFL any more – not that they really play in the NFL in any but the loosest sense of the term. Too bad, Houston Texans, I guess next year you’ll be playing sixteen games against the Cowboys – but look at the bright side, you may well go undefeated.

Let’s see, what else will we miss once Texas secdees? Anybody? Anybody at all?